Dave asked me about this last week and I had a chance to look at it yesterday: 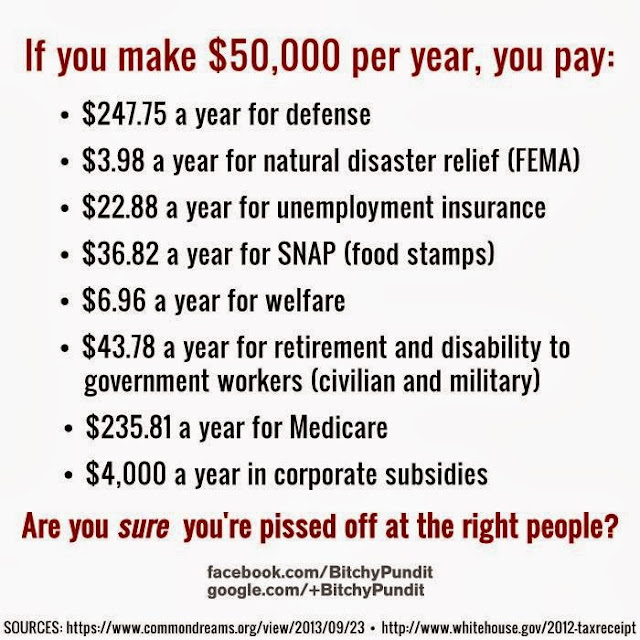 I'll admit I'm lazy so it's handy when these memes carry the key to their own debunking with them.  I went right over to the 2012 Tax Receipt page on the White House website and since this said $50,000 per year I selected the given $50K option from their estimates drop down menu, which I figured was most likely to be the source of this meme:

And, well, it was clear from the get-go that this meme is full of shit: 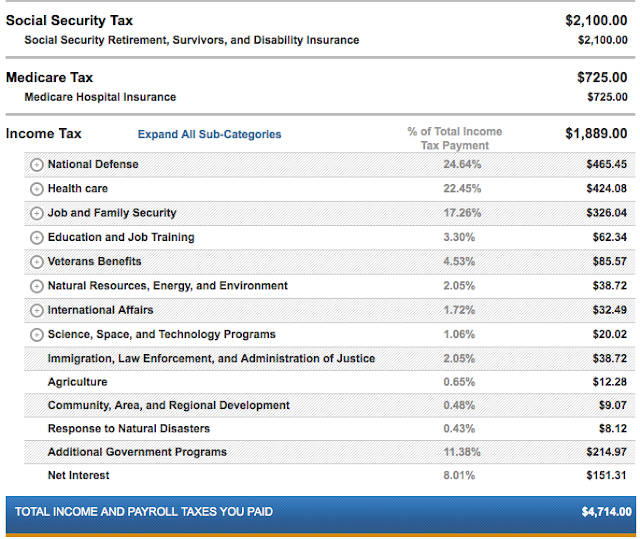 Short version is everything's higher in the given WhiteHouse.gov tax receipt.  Since you can enter your own numbers, it's entirely possible you can come up with the right combination of them to provide what's shown.

I think it's worth noting that there is nothing on the White House site that gives a figure for corporate subsidies.  I'm not even going to waste my time on CommonDreams.org because that website's bias is screamingly obvious from the name.  It's worth it to note that even other liberal sites don't agree on the $4,000 figure; numbers range from $1740 in direct and corporate tax subsidies on Bill Moyers's website to $6000 claimed by "Truth-Out" (which seems to cite the same CommonDreams.org bit the image above does; it also parrots the $36/yr SNAP claim, and references Democratic Underground for this**).

Since everyone seems all hopped up on the "food stamps only cost you $36/yr" bit, allow me to drill down into the Job and Family Security heading it's located under:

Huh.  Seems they underestimated it by very nearly half.  Within 20¢ of half, in fact.

Still, my opinion on SNAP is a 180 from the majority of my fellow conservatives.  You can see with this that it's a minute percentage of your tax dollars.  I'll tell you now the Republican party is going to continue to fail as long as they're beating the "poor people shouldn't eat" drum, which is exactly what opposition to SNAP sounds like to the average person.  All of this bitching about what poor people buy and how the EBT cards don't carry the same stigma as paper food stamps 'cause people aren't ashamed like they should be ('cause fuck them for wanting to eat, right?) is frankly pretty damned ridiculous.  It's not a winning strategy; it makes us look like a party of assholes and we really need to STFU about it.

Thing is, I think no matter what side of the aisle you're on, you probably will agree with the conclusion on that graphic: Are you sure you're pissed off at the right people?  Of course, they want you to be pissed off at Republicans, which is silly because Democrats are no friend to poor people except in their own minds.  (The SNAP program reduction has been known about at least since 2010 and actually came from the administration; there was no outcry over it back then because not enough time had passed to pin it on Republicans.)

(I drastically increased the text size on the web page before taking this screenshot so it would be a little clearer, by the way.)

More of your tax dollars go to SNAP alone than to all of the Education and Job Training category.  Here's the drill-down of that category:

Not even fourteen bucks goes to college financial aid and job training and employment services: $13.60.  Over five times as much (if my math is right, which it may well not be) money goes to SNAP than to programs that might actually help people get off SNAP.  Which is more evidence to support my hypothesis that both Republicans and Democrats are more than happy with a permanent underclass.

**Seriously, when the fuck will people realize that linking to opinion sites known for spewing bullshit isn't going to prove anything other than you're an idiot who wouldn't recognize an unbiased source if it reached out and slapped you?  But hey, FauxNews amirite?

I figured you would provide a solid analysis of this and I think you did just that. I totally agree that no matter how it is intended, when Republicans/Conservatives want to cut assistance programs for the needy, it comes out looking bad.

Thank you for taking a look at it.

Thank you for your analysis and expose. Way better than clever insults that the speaker thinks are refutations of an argument.

While there is a stupendous amount of crap out there on the internet, what amazes me is that no matter how whacked out the info may appear to a rational mind, there are people who will believe it. I don't know what to do about that except try and tell the truth.

Thanks for giving me something to link to next time somebody pastes that stupid graphic onto my FB stream. (Yeah, I know, I get what I deserve for being on FB.)