So my baby linked to a post by a pastor flipping out over guns in general and the Hello Kitty AR-15 in particular. Everything that is to be said about that on the gun front has been said; I am feeling rather puckish tonight, so I am going to take the conversation in a totally different direction.

Because my first thought was That bugs him? Obviously, the dude is not familiar with the Hello Kitty empire.

I'm going to put the worst right up front. And I will apologize in advance for this. (And be nice enough to put the rest of this behind a jump, so as to protect your delicate sensibilities...and 'cause it's about to get NSFW.)


Okay.  Coming along for the ride?  Great!

Of course there's more than one version available!
And, of course, that's not all!

Then there's the Hello Kitty notebook: 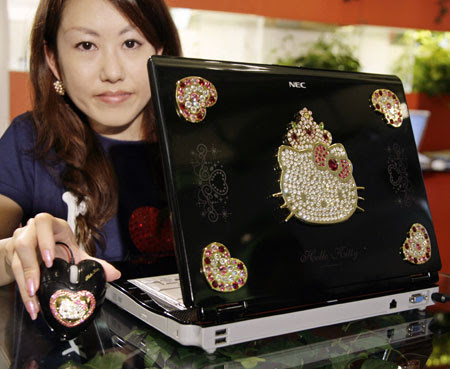 (Whether this is a different thing than one of the Hello Kitty laptop skins readily available, I cannot say.)

As a girl who loves her carbs, I find this (particularly the, ah, pattern on the finished product) particularly disturbing: 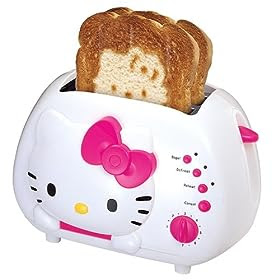 Once again, this is not the only version available, by far.  There's even a Hello Kitty toaster oven.  So you can make your pizza.

Carrie Underwood needs one of these:

And, hey, if you don't do acoustic, there's an electric version available as well.

Going back to something really disturbing:

Now, really, what is it with grown women wearing cartoon characters?  Y'all this is far from the only thing I found when I Googled "Hello Kitty panties."  And most of the results were not for little girls.  Target carries a yellow Hello Kitty "ruffle thong", which is inexplicably out of stock.
(Guys, how much would it worry you if your inamorata took off her jeans to reveal Hello Kitty panties?)

And how much do you wanna bet the girl with those also has this?

The Hello Kitty Barbie is like the perfect storm of commercialism:

OK, this just keeps getting worse.  I'm going to give up on it (because it's starting to scare even me) and leave you with these two links:

College Candy: The Hello Kitty Epidemic, Side Effects: Nausea and Vomiting
and of course the granddaddy of them all, Hello Kitty Hell, which has even more hellishness than I could think of to Google, including the Hello Kitty Chihuahua.

(And, yes, I realize that may well be a hoax, but apparently there's a call for the blasted things.)

**I fixed it.  I haz teh dumbz when it comes to varieties of rifles.  I stand by my contention that Hello Kitty Assault Rifle is simply funnier, but I don't want to continue to call it the wrong thing when I've been told differently.  Mea maxima culpa.  I'm now going to go kick my boyfriend's ass for not catching the mistake earlier.

Since we are just naming things on whimsy now, I like to call them Happy Fun Guns. They are low recoil, easy to operate, small caliber varmint rifles, just the thing to have a fun afternoon at the range with.

Of course you are right! I am too easily amused, I suppose. Hello Kitty Assault Rifle is funnier than just Hello Kitty Rifle. But Hello Kitty Happy Fun Gun rocks. Would that I could do strike-through in a title; I would so edit that...

The Hello Kitty vibe. Pure genius! Proof that there is a market for just about anything.

Curse you sabra. I have been trapped by the evil at hello kitty hell dot com. what pure evil genius this little feline has.

While my daughter was still in the Marine Corps I got her a Kalashnikitty t-shirt. She wore it to the office off-duty and her co-workers loved it.