I lived through two uniform generations as a Navy wife, the old dungarees (for a few months; they're the old-fashioned blue shirt, blue bellbottom pants) and then the "No, really, I'm not a janitor" utilities. That one switch left me convinced the Navy is on a steep downhill slope in regards to uniforms. The utilities were both more expensive and flimsier than the dungarees; the ex blew out the crotch in his first three pairs under a month. And, of course, there was the issue that they lacked the distinctive Navy look, instead making the men look like civilians with particularly menial, low-paying jobs.

That said, I'm damned glad to not have to deal with the next gen o' uniforms.

Let's see if we can pick out which is worse. First contender, the new Naval Working Uniform: 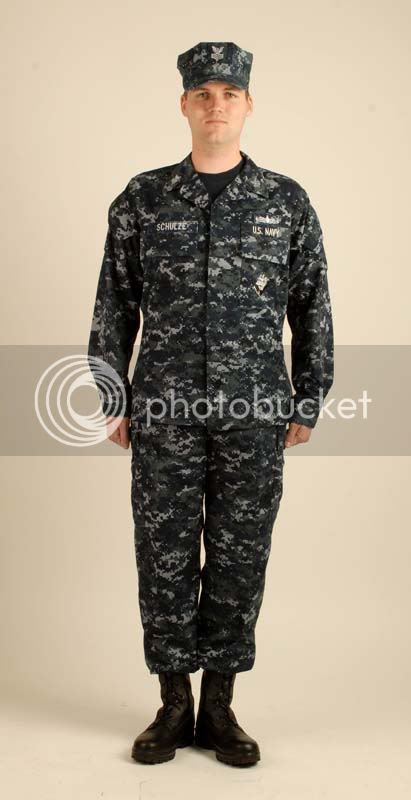 Because, of course, the Navy has to steal everyone else's idea of wearing BDUs, but call 'em NWUs, 'cause of course it's so different.

I wonder if someone, somewhere, during the process of deciding upon this uniform ever said "You know, camouflage is supposed to make people less noticeable. I'm not entirely certain this blue camo is really the proper choice for men clambering all over haze gray ships."

Or, to put it another way, I'll quote DukeRulz over at No Slack, Fast Attack:

"And, again, I must ask, camouflage? What are you hiding from at sea? Does it have a blaze orange interior for those man overboard evolutions?"

For a while there, all men standing topside watches while in port (at least on the USS Boise, though I was given the impression this was a Squadron Six-wide thing) were authorized the old-school dark green camo for their duty days. Rob loved that shit. The BDUs were apparently comfortable, durable...and you could wear them off-base.

Not so these. I think the only thing that kept hope about the new uniform alive the last few months Rob was in the Navy was the thought the men would be able to wear these out on town. On the contrary, apparently not only can you not, you're not even authorized the "one brief stop" on your way to/from work. (I predict great suffering for the 7-11 closest to NOB Norfolk.)

That, and they look like something the Air Force turned down as too gay.

But wait! There's more! I have truly saved the best for last. 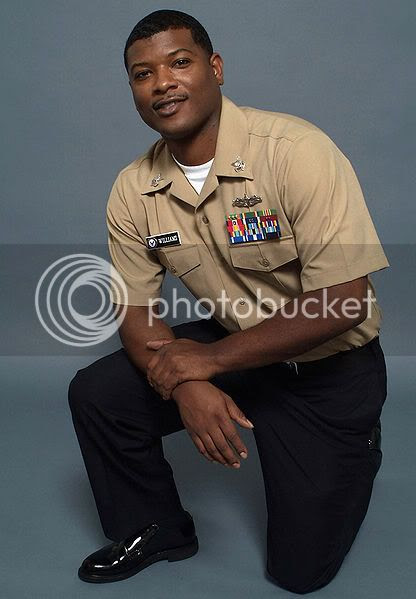 When I first saw that, I thought "Hmm, he's damn fine." And then I thought, "Wow, nice new chief uniform."

But no. No, that's not what that is. That is the new ServiceUniform. For E-6 and below.

Most people who read this blog are probably pretty clueless. Brief explanation: E-6 & below--blueshirts--have up until now worn dungarees/utilities as the norm, with either dress blues or whites when they needed to scrub up. The term "blueshirt" really tells you all you need to know. E-7s & up--Chiefs--got to trade in their blue for khaki. No matter where they went, if they weren't in a poopy suit, they were in khaki. (Officers too, of course.)

You made chief, it meant something. And that was symbolized by that khaki uniform. I'll steal a quote from the Navy Times's article on the issue, 'cause I can't possibly put it any better: “But now what do you have to look forward to? Buying a set of khaki pants?” Seriously, y'all.

For the record, Rob never rose above E-5. And not a particularly promising E-5, if you know what I mean. But still. I showed him the NSFA post & he had pretty much the same visceral reaction to this.

Now, I'll be fair. Both uniforms do offer some slight advantage to their forebears. The new NWUs are significantly less ugly then the utilities. And hopefully will prove to be sturdier. The new ServiceUniform does simplify the issue of dress blues/whites. It's cheaper & will obviate the issue of what to wear when. Of course, not only does that step all over the toes of the chiefs/officers, but it takes away yet another piece of Navy tradition. There aren't a whole hell of a lot of sailors in San Antonio, but they're instantly recognizable because of their uniforms. Now, at best, they're gonna look like a slightly confused Marine recruiter. (Seriously. Picture those pants blue with red piping.)

Sigh. Damn glad I don't have to deal with that anymore.

You don't earn Khakis when you make Chief, you earn the anchors you put on them.

Quite right, of course.

now the NWUs ARE allowed for brief stops in transit from your duty station to your residence, and when taking care of command business you are permitted to wear them off base. And this is just the beginning, the navy brass had said all along that they wanted to make the new uniforms wearable everywhere, the only concern was that sailors would be wearing them improperly as it is a new item. so as we progress they are becoming more & more lenient, and it is projected that the full off base privileges will be assigned by early 2010.

and for the new service uniform, like the anonymous person before me posted, its not the khakis that bring the pride of making chief, it is the gold anchors.

now the NWUs ARE allowed for brief stops in transit from your duty station to your residence, and when taking care of command business you are permitted to wear them off base.

This is true. I am very glad to have been proven wrong on this particular subject (though I'm still a little confused as to how many hits I'm getting on this post). I know that being allowed to wear these uniforms off-base in general has MPCON West's full support, and I look forward to that day.

They're still ugly as hell, though. Way back in the mists of time when these were first floated, they met with a great deal of derision. I'm curious as to whether the opinion has changed for the better now that they're "real," & also whether they're better quality than the previous working uniform.